Most people don’t look at a swamp, full of cattails, as an awesome food source.

Those brown fuzzy heads are easy to spot, and many portions of the plant make great food. 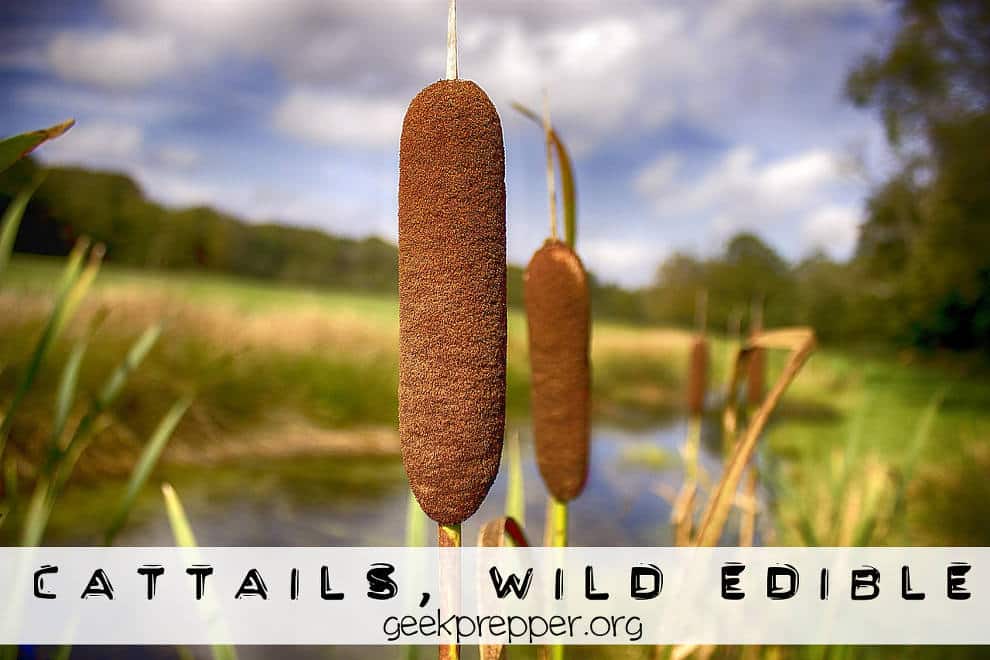 All the foraging books refer to cattails at some point and with good reasons. You can eat almost the whole plant, and regardless of the season, there is part of it that’s ready.

Cattails grow in marshes, swamps, ditches, and fresh, stagnant or slightly brackish water fresh. Finding them is a sure sign of water.

Every part of the cattail has uses. It’s easy to harvest, fairly tasty, and nutritious. It was a major staple for the American Indians, who found it in such great supply, they didn’t need to cultivate it. Select the largest shoots that haven’t begun to flower, and use both hands to separate the outer leaves from the core, all the way to the base of the plant. Now grab the inner core with both hands, as close to the base as possible, and pull it free.

Peel and discard the outermost layers of leaves from the top down, until you reach the edible part, which should be soft enough to pinch through, with your thumbnail (the rule-of-thumb).

There are more layers to discard toward the top, so you must do more peeling there. Cut off the tough upper parts.  You can peel and eat them well into the summer. The shoot provide beta carotene, niacin, riboflavin, thiamin, potassium, phosphorus, and vitamin C.

Young shoots can be prepared like asparagus, but requires a longer cooking time to make them tender. Added to soup towards the end of cooking, they retain some of the fresh crunchiness.

They’re similar to a combination of zucchini and cucumbers, adding a refreshing texture and flavor to salads. Mix them with pungent mustard greens to balance out their mildness.  They’re superb in stir-fry dishes, suitable for sandwiches. Slice the cattail hearts, saute them in sesame oil with wild carrots and ginger.

Note: Collecting shoots will cover your hands with a sticky jelly. Scrape it off the plant into a plastic bag, and use it to creat a slight okra-like thickening effect to soups. The Native Americans also used the jelly from between the young leaves to wounds, sores, boils, carbuncles, external inflammations, and boils, to soothe pain.

You can eat the male portions of the immature, green, flower head. Roast them directly over the fire, steam or simmer them for ten minutes. It tastes similar to its distant relative, corn, and there’s even a cob-like core.

Its easier to remove the flesh from the woody core, if desired, after steaming. This adds a rich, filling element to any dish, and it’s one of the best wild vegetarian sources of protein, unsaturated fat, and calories. It also provides beta-carotene and minerals.

Right before the summer solstice, the male flowers ripen and produce considerable quantities of golden pollen.  To collect the pollen in its short season, wait for a calm day, so your harvest isn’t scattered by wind.

Bend the flower heads into a large paper bag and shake it gently. Keep the bag’s opening as tight as possible, so the pollen won’t blow away. Sift out the trash, and use the pollen as golden flour.

Cattail flour can be used in baking breads, muffins, pancakes, and waffles. It doesn’t rise, and it’s time-consuming to collect in quantity, so most people mix it with at least three times as much whole-grain flour. You can also eat the pollen raw, sprinkled on yogurt, fruit shakes, oatmeal, and salads.

The root can be dried and pounded to make nutritious flour. Cattails, aka Bulrushes, have many non-food uses.

If you dip the head in fat or oil, they can be used as torches.

Once the season has passed and the pollen is gone, the brown heads make good “punks,” supporting a slowly-burning flame, with a smoke that drives insects away. The heads make a perfect survival tinder.

The fluffy, white seeds were once used for stuffing blankets, pillows and toys. The Indians put them inside moccasins and around cradles, for additional warmth.

You’ll want to use a thick batting material to enclose this stuffing as it can cause reactions to skin after sustained direct contact, in some individuals.

Cattail leaves can be used to thatch roofs, weave baskets, and make mats.

As with any wild vegetation, ensure that it’s actually a Cattail, there are a few plants that have a “similar” appearance.

Blue Flag (Iris versicolor) and Yellow Flag (Iris pseudoacorus) and other members of the iris family, possess leaves that appear very cattail-like.  There is an obvious difference.

If you follow the  leaves which are flat and smooth with no ribbing, to the flat fan arrangement at the base of the plant you have an iris. Cattails leaves have a midrib which form around a stalk and  they do not fan out.  All members of the Iris family are poisonous.

The leaves on a Sweet Flag (Acorus calamus) are wavy and have parallel venation with a midrib.

It has a seed pod growing out of the side of the stock.  Cattail seed pods are ALWAYS at the top of the stem.

Sometimes the margins on the Sweet Flag are red. Cattail leaf margins are never red or wavy.

In some East Indian and Chinese cultures, the roots of the Sweet Flag have many medicinal uses. American Indians used it quite extensively.

If you find a Calamus make a note you may want to go back later.  If you are in doubt if the plant is a Cattail or a Calamus just bruise the leaf.  If it  has a sweet, spicy aroma it is a Sweet Flag. Cattails, if anything, smells like grass.

Once you have a positive Cattail ID, make sure the water, where the Cattails are growing, is safe. This means there should be no runoff, factories around, dumping, or contaminants in the water.

Cattails are a super filtering system and will take up the pollutants, heavy metals, chemicals, and clean up the water.  All those chemicals and pollutants are now concentrated in the plant.

If you eat from a plant in a polluted area you will be getting all the contaminates that plant took out of the water. Make sure your Cattails have a good clean water source.