Finally, you can now find several special battery chargers that do not only charge rechargeable batteries but allow you to recharge alkaline batteries, too!

When I was a young boy, I had a friend, whose father was an electrical genius. He was always creating electronic breadboard projects.

One of these projects was a charger that charged dead alkaline batteries.

I had pretty much disregarded that memory as a dream until I recently was doing some research online and stumbled across a thread about battery chargers that are able to Recharge Dead Alkaline Batteries. 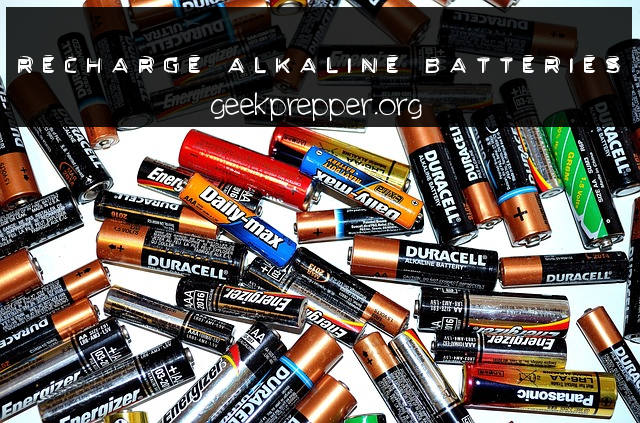 An Alkaline Battery refers to a type of battery, which is constructed from potassium oxide’s alkaline electrolyte, instead of zinc or ammonium chloride – both of which are full of acidic elements and components. It can either be rechargeable or disposable and generally has 1.5 volts per cell. It is also available in a wide range of sizes. You can see these alkaline batteries being frequently used in daily electronics. However, before using this type of battery, it is necessary to get to know more about its pros and cons:

You can also expect alkaline batteries to perfectly suit applications with normally low current used. These applications include devices that operate without the need for a huge amount of power as well as those gadgets used only periodically, such as radios and remote controls. You do not also need to worry about it going bad due to age as there is a low chance that it will happen.

Aside from the shelf life, an alkaline battery also boasts of its longer lifespan in comparison to its counterparts so there is no need to replace it too often. However, it also carries a few flaws, like: Despite that, alkaline batteries still continue to gain traction nowadays.

Can You Recharge Alkaline Batteries?

Charging or recharging alkaline batteries is not highly recommended, although that is possible with the help of a special alkaline charger, which you can use to the rechargeable alkaline. There are several reasons why recharging the battery is not recommended. One of these is that charged ones can supply only a few recharge cycles. What you get is a dozen of recharge cycles, sometimes even less. This is not the same with a real rechargeable, such as NiMH, since you can also recharge it for hundreds or thousands of times. Avoid using a charger for NiCd, NiZN, or NiMH. You need a charger, which is specifically designed to deal with and handle alkaline batteries. This charger is essentially a computer itself, so it can optimize the conditioning and charging cycles for each individual battery. During testing of this charger, they were able to recharge some alkaline batteries to 75-90% of original capacity up to and beyond 30 times! MORE THAN 30 TIMES! This isn’t a guarantee, but a rule of thumb, mileage will vary.

When you insert a battery into this charger, it determines the status of the battery and will either start charging if it’s good or alerts you to the status if it’s bad.

The ability of this charger to charge different kinds of batteries, including alkaline batteries that are non-rechargeable in the past and the rechargeable alkaline manganese proves its versatility. This battery charger also works great, thanks to its high-speed discharging and charging ports. With its microchips, you have an assurance that it will monitor the batteries’ charging and recharging smartly and intelligently.

Another benefit I noticed about this special charger is that its charging speed is quite fast, so I can assure most users that it is less time-consuming to use. It boasts of its delta cut-off function, which is a great thing because it stops the charging process automatically once the batteries are already full, thereby preventing short circuits.

The features and functions of FC999 are simple and easy to use. You will even love its LED and LCD displays capable of illustrating the battery’s charging statistics once you put it in the charging bay. The ChargeIt Battery Station Pro Battery Charger uses the same microprocessor technology as the Maximal Charger but also has 2 built-in USB ports, allowing you to charge mobile devices! This charger also runs checks when a battery is inserted to determine if it’s good or bad and alert you to the battery’s status. Another advantage of this special charger is that it is capable of simultaneously charging a max of 5 batteries, thanks to its 4 universal ports as well as another one that you can find in the 9V port.

It also features a couple of USB ports that you can use to attach and charge devices. I am sure you will like the LCD screen of this special charger, too, as it can display the level of charge in the battery and its charging status.

While some manufacturers do not recommend and support recharging alkaline batteries due to the dangers that they might cause, it is still possible to recharge them through the available chargers specifically built for them. Just make sure that you pick a high-quality special charger, which can do a pretty good job of recharging your alkaline battery.

Also, take note that a recharged alkaline battery’s capacity has a higher risk of declining through a number of recharges. This is the main reason why you still have to take care of them, especially if you recharge them often. One thing to keep in mind is that alkaline batteries were not designed to be recharged, so some of them may leak. After you charge them, let them sit on a safe surface and watch for leakage for a few days. This is important in ensuring that they will not leak in your electronic devices. The cheaper batteries seem to do this more than the high-quality ones.

With a small solar setup, you can charge rechargeable batteries but by adding this charger to the mix, it would open the door to reusing alkaline batteries that most people will discard without a second thought.

The ability to recharge regular (alkaline) batteries will come in very handy, save you money and keep those batteries out of the landfill. It is recycling, therefore, it is good for the environment and smart prepping!